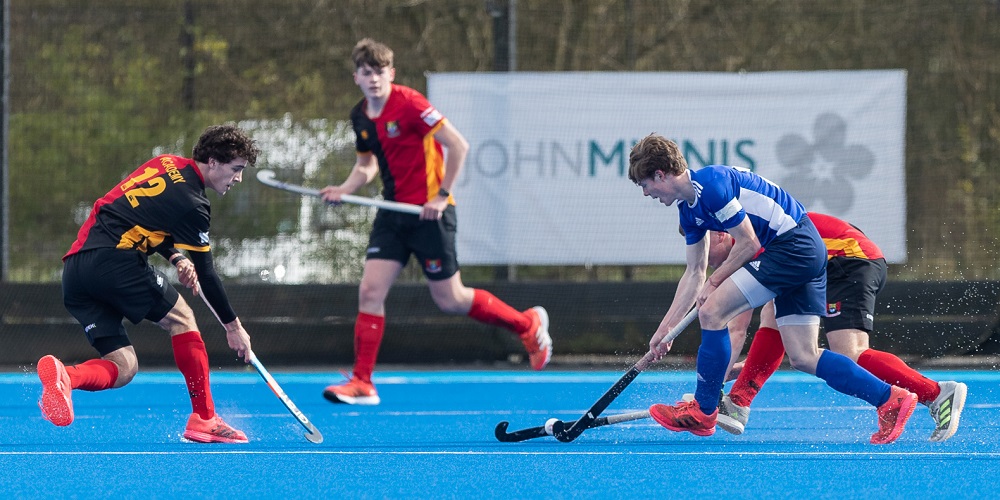 In the first semi-final we were treated to a high octane game between Banbridge Academy and Cookstown High School.

Although Banbridge showed more promise, the scores remained even after the first quarter.

Early pressure at the start of the second was rewarded with an 18th minute goal by Matthew McKee. Cookstown responded within only a couple of minutes through Ewan Cruikshank to level the score at 1-1.

Banbridge continued to press after the break. This was rewarded with  a Ben Pollock strike on 43 minutes. Despite the continuous pressure Cookstown held out, to be only a goal down at the end of the 3rd quarter.

In the 4th quarter a tiring Cookstown defence began to leave gaps. Banbridge took advantage and two McKee strikes, after 47 and 53 minutes, completed his hat trick and put Banbridge 4-1 up, effectively settling the game.

Cookstown showed character and responded with a second Cruickshank goal on 55 minutes, but it was too late to halt a Banbridge 4-2 victory and their place in the final.

In the second semi final of the day we were treated to a thrilling end to end game between Regent House and Friends’ School Lisburn.

Both keepers were seriously tested in a frenetic first quarter with a Guy McGonigle strike on 4 minutes giving Regent the lead, however this was short lived. Mackenzie Connor equalised for Friends 5 minutes later and it was all square 1-1 at the end of the quarter.

In the second quarter little could separate the two teams until Jamie Spratt illustrated some excellent skills with a delicate lift over the Friends’ keeper to give Regent a 2-1 lead at half time.

In a nip a tuck third quarter the crowds were treated to some end to end hockey. Jamie Anderson found the equaliser on 38 minutes to level the 3rd Quarter at 2-2.

The speed of the game took its toll in the 4th quarter. As the lactic acid built up, players dropped like flies from cramp and gaps opened in defences, which led to frantic play.

With 5 minutes to go Harry Barbour struck, what would ultimately be the winning goal for Friends.