Despite some fantastic hockey, it was a runner-up filled weekend in Cork for our Ulster 35s, 40s, 45s, 50s and 55 Ladies teams. All 5 teams returned north with sore bodies and second place finishes. Nevertheless, all players and staff represented Ulster with aplomb and should be congratulated on their performances.

Our respective esteemed captains briefed the Ulster Hockey family on all the action.

“This was the first time the Interpros hosted an over 35s team and with only three teams entering; Muster, Leinster and Ulster, it meant each team had to play each other twice. The squad had a hard battle to fight after losing their first game to Leinster 4- 0, however the strength and determination of all was evident as they then won their next two games with a 1-0 win over Muster and a 4-3 win over Leinster having come from 1-0 down. The last game of the tournament between Ulster and Muster was the deciding game with Muster winning 2-0. Whilst Ulster over 35s came away as runners up of the tournament, it was clear there wasn’t much between the three entering teams as each beat each other in one of their respective games.”

“Our Ulster 40’s squad travelled to Cork to play in the first Interprovincial Tournament since 2019.  The squad was superbly led by coach Emma Gillespie and managed by Gail Nicholson.  We started the tournament strong on the Saturday with a 2-0 win over South East; a few hours later we settled ourselves to play the tournament hosts, Munster.  This match was full of exciting play and nervous moments for those watching from the sideline, in the final quarter the score stood as 3-2 for Munster.  With 20 seconds to go Sabrina Barnett took the Ulster free quickly, getting the ball to Aine Kearney who calmly passed the ball for Jenny McAuley to put into the back of the net; final score 3-3.  Ulster finished Day 1 at top of the table, and attended the lovely reception that was kindly organised by our hosts Munster.

Day 2, Ulster 40s had it all to play for; first match of the day was against Connacht, this was a high intensity match with play going from end to end.  However, it was Connacht that opened the scoring.  Ulster continued to drive into the Connacht circle and were winning corners, but the Connacht goalkeeper played brilliantly and kept all but one of Ulster’s attempts out.  Final score was 2-1 to Connacht.  In true Masters spirit, we dug deep and readied ourselves for the final match of the tournament against Leinster.  However, luck was not on our Ulster girls side and we lost 2-0.

We would just like to thank again Emma and Gail for all of their hard work both in the build up to and during the Interprovincial Tournament.  Also, a huge thank you to the Munster Committee for an amazingly organised tournament.” 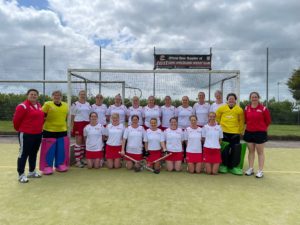 “The over 45’s welcomed 8 new players into the squad this year along with 10 players and coach Andy Edwards returning to Masters hockey from the previous ‘pre-Covid’ team who were 45’s winners in Dublin 2019.
The ‘newbies’ settled in really quickly and the pre- Cork friendly matches were a great reflection of their ability and enthusiasm and how much the whole squad had gelled both on and off the pitch to produce some great hockey. Debbie Campbell as manager was certainly instrumental to the ‘team bonding’ too.

In Cork, we were all hugely disappointed to come away with two first-day defeats in the Saturday matches – losing 2-0 to Leinster and then 2-1 to Munster, who scored their winner in the final minutes of an end-to-end game. Despite being disheartened, the squad remained resilient, up-beat and determined to make amends the next day.

A 2-2 draw with Leinster on the Sunday morning spurred on the positivity but hosts and subsequent 2022 winners Munster, proved too strong in yet another hard fought battle so our fourth and final match in two days ended 4-1.
Testament to the strong team spirit of the 45’s squad we have all came away disappointed but cherishing new friendships and priceless memories of a fantastic weekend of craic / singing and even a bit of 80’s music dancing!! We really stuck together through the highs and lows of the weekend like any good squad does. The commitment to each other and work rate of every player was second to none – we certainly ‘left nothing on the pitch’ and have a fresh determination to learn from Cork 2022 and come back stronger and better next year!! 💪🥰

To quote one of our new players, ‘I love hockey even more after the weekend’
Sure isn’t that what it’s all about after all?!!!!❤️🏑
Huge thanks to Andy and Debbie for all their hard work and very best of luck to those in our 45’s and all Ulster players representing Irish Masters in June!!” 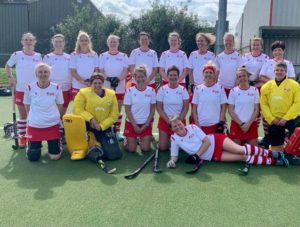 “What better way to try to ignore the passage of time than being part of the Ulster 50s team or the Interpros in sunny Cork? Superbly led by coaches William and Angie and cosseted by manager Gill, we overcame first match nerves to beat Leinster 2-0 without conceding a single penalty corner. A few hours later we took the field again for a very exciting clash with Munster. Leading 1-0 going into the final quarter it was still all to play for, but sadly Munster’s excellent play and the physical and mental toll exacted on us by 2 matches in quick succession led to a heartbreaking 2-1 defeat.

In true masters spirit we rallied and had a blast in the evening, catching up with old friends at the lovely reception so kindly organised by our Munster hosts and a later Ulster special at our hotel (thanks Angie).

We ended on a high with a 3-0 victory over Connacht, to secure runner’s up spot and having the opportunity to support other Ulster age groups before thanking our local hosts for an excellently run, very friendly tournament and hitting the road.

Reaching home turf in almost the wee small hours we were left with special memories and wondering how did we get off the bus so easily on Friday?!” 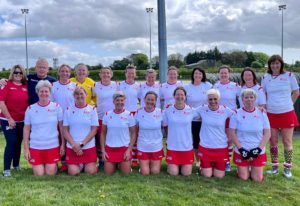 “At our age When you tell friends you are off to Cork to play in a hockey tournament you get a number of reactions
– you must be mad !
– you must be really fit!
– you must love the game!
The over 55 team that have just returned from Cork are all of the above.

This is the first year Ulster have entered an o55s team. Some of the team had played o50s in the past, some play for club and this was their first interpros and some hadn’t played for a few years. Players from across the province Rainey to Newry and Bangor to Lisnagarvey

In Cork we played two games v Leinster o55s and had a 1-0 and a 2-0 defeat. Over the two days. The team played well and have improved a lot over the time we have been together. Lots more to come next year!
Many thanks to our coach DD McMullan, to Gill Jackson manager and to Julie Wilson for organising training pitches and kit.
We had a ball.” 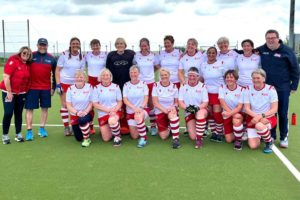