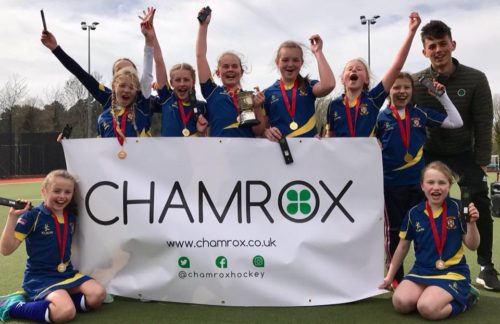 Just like the race for the two titles, the battle to see which team avoids the drop from the women’s Ulster Premier League has gone down to the wire with the remaining issue to be determined on Saturday.

After Wednesday night’s games, North Down will be relegated unless they defeat Rainey, whose top-flight status was secured without hitting a ball in anger.
North Down lost 1-0 to Randalstown, Kerry Coulter’s 52nd minute penalty corner giving the Co Antrim side a hard earned victory in Comber.
Portadown meanwhile fought out a 1-1 draw with Banbridge in their final match, being denied the win by a Stef McCullough equaliser which came with just 10 seconds remaining after Claire Dunn’s opener.

The net result is that the Ports now have 10 points, two more than North Down, who will be demoted if they fail to beat Rainey, who are now safe on 13 points. As it stands, Portadown have a lifeline and will face Ballymena in a promotion-relegation play-off should North Down be unable to get the three points they need on Saturday.

Ballymena guaranteed themselves the play-off and a chance to make it into the Premier League for the first time following a 3-2 home win over Victorians on Wednesday.
Emma Clarke gave Ballymena a dream start when she opened the scoring after just two minutes before Kirsten Young doubled the lead. Joanne Orr pulled one back before the break only for Claire Gillespie to make it 3-1 with Vics’ late response through Emilia Cutrona unable to affect the outcome.

At the other end of Senior One, CI made sure of the same status next season with a decisive 4-1 win over Knock. Goals from Lindsay Mercer, Emma Jordan and two from Rebecca Haley sealed the win which now leaves Ballyclare needing to win a play-off to stay up.

Meanwhile, the girls’ McCloy Cup came to a close on Wednesday with 24 teams battling it out to lift the trophy at Playball, Stormont. The morning group stages played out with fantastic hockey coming from new comers Bush PS, Killyman PS and Damhead PS. After lunch the top teams were put into the cup groups with the runners-up going into the plate groups. The quality of hockey on show was brilliant and credit has to go to all the coaches that have worked so hard.

Semi-finalists in the cup saw Waringstown pitted against Armstrong and Friends vs Seagoe. Armstrong came out on top along with Seagoe to set up an all Mid – Ulster affair in the final.
In the Plate we saw Templepatrick up against Millburn and Fairview against Damhead. Both of the Coleraine sides came up trumps and set up a repeat of the Limavady qualifier. Both finals were end to end with chances going a miss for either side. In the cup Armstrong scored a late goal to seal the win and bring the cup back to Armagh while In the Plate Damhead repeated their heroics of the qualifier and came out on top.

“The quality of hockey on show was brilliant and credit has to go to all the coaches that have worked so hard.” said Ulster Hockey’s youth development office Andrew Brown.
“Thanks also goes to Joan McCloy for helping with the presentation, all our umpires, teams and spectators, Matthew Nelson and to Chamrox for supporting both the McCloy and Pearson cup over the last three months.”

Meanwhile, in the EYHL, Pegasus can make absolutely sure of a place in the end of season Champions Cup if they pick up a point against Belfast Harlequins at Deramore on Saturday. Quins will be out to avenge a 1-0 ISC semi-final loss to the same opponents but, should they fail to win any remote hope of a place in the top four will evaporate. Ards have a tough task at home to leaders UCD at Londonderry Park, where a point for the visitors would wrap up the title.

There are two local derbies in the men’s EYHL with Annadale hoping to get over the line in their bid to avoid a relegation play-off when they face Lisnagarvey. Garvey will be aiming to bounce back from last week’s 4-2 defeat by Glenanne, which saw the Tallaght side lift the title. Banbridge are in desperate need of a win to have a chance of making the play-offs when they face Cookstown, who themselves require a positive result as they bid to pull clear of the relegation play-off spot.